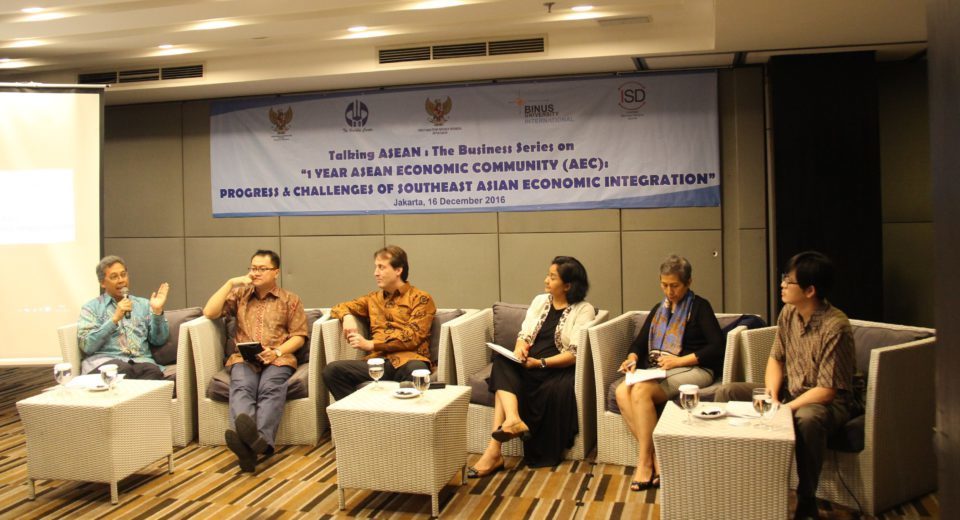 Launched at the end of 2015, the full implementation of the ASEAN Economic Community (AEC) is approaching its one year anniversary. Despite this, question lingers over the extent to which further progress has been made towards the deepening of ASEAN’s economic integration.

Around the time when the AEC was launched last year, the implementation rate of various ASEAN’s economic integration commitments amongst ASEAN Member States (AMS) stood at around 92.7 percent out of 506 measures that have been implemented since 2008. Whilst ASEAN was relatively successful in attaining its goal in pushing for equitable economic development and making sure the region is getting fully integrated into the global economy, some outstanding works remain in the Association’s effort to turn itself into a full single market and production base and competitive economic region, each with 21 and 16 outstanding measures needed to be completed respectively. In view of this, ASEAN observers generally agreed at the time that the end of 2015 should not be seen as a ‘must-do’ target, but, rather, a milestone, with the real test of the AEC will lie in the years beyond.

Indeed, moving beyond 2015, ASEAN also introduced the AEC Blueprint 2025, which was built on the basis of the previous AEC 2015 Blueprint. The immediate priority of this new 2025 Blueprint was to complete the implementation of unfinished measures under the previous 2015 Blueprint by the end of 2016. In the next decade, ASEAN strives to deepen its economic integration initiative through five interrelated and mutually reinforcing characteristics, namely: (1) a highly integrated and cohesive economy; (2) a competitive, innovative, and dynamic ASEAN; (3) enhanced connectivity and sectoral cooperation; (4) a resilient, inclusive, people-oriented, and people-centered ASEAN; and (5) an ASEAN that is fully integrated into the global economic community.

There is little doubt that the deepening of ASEAN’s economic integration is becoming more imperative now than ever, especially given the persistent global economic uncertainty. Pundits generally agree that the benefits of the deepening of ASEAN’s economic integration outweigh the benefits of each AMS pursuing its own national economic agenda. A recent study, for instance, argues that the full implementation of the AEC could: (1) raise the region’s GDP growth by 7.1 percent above the baseline forecast; (2) generate an additional 14 million jobs in ASEAN economies (Cambodia, Indonesia, Lao PDR, the Philippines, Thailand, and Vietnam) by 2025; and (3) hasten the pace of structural change.

Whilst, when it comes to AEC implementation, much attention has been given to ASEAN and its AMS, equal attention should also be given businesses and other stakeholders in the region. AEC, after all, was not designed to serve the need of ASEAN’s bureaucratic machinery, but, rather, the region’s population at large. Awareness about and utilization of AEC facilities amongst businesses is an important parameter with which the AEC could claim success. Equally important, ASEAN’s ability to address detrimental impacts from its AEC is also an area with which the relative success of the Association could be measured.

It is with these backgrounds in mind that the Coordinating Ministry of Economic Affairs of the Republic of Indonesia, The Habibie Center, the Permanent Mission of the Republic of Indonesia to ASEAN, BINUS UNIVERSITY INTERNATIONAL, and the Indonesian Services Dialogue intend to organize the First Talking ASEAN: The Business Series that focuses on AEC progress and challenges since its official launching a year ago. Aside from creating a space for ASEAN officials to socialize the latest implementation update of the AEC 2025 Blueprint, the forum will also serve as platform with which businesses and other stakeholders could voice their aspirations, concerns, and hope towards ASEAN’s economic community building process.

Therefore, BINUS INTERNATIONAL collaborates with The Habibie Center, which already has its own talking series about ASEAN since 2013, to hold a talk show series with a larger scope. “And it was responded positively by Coordinating Ministry of Economic Affairs of the Republic of Indonesia who also wants to conduct a talk show series to inform the actual situation about AEC,” said Marko S. Hermawan, Ph.D, the Head of International Business Program of BINUS INTERNATIONAL.

This talk show series, he added, is a wide collaboration among various institutions – educational institution, association, and government. From this collaboration, hopefully there will be lots of insights from many different perspectives.

“I hope the students can obtain the most actual information about AEC, as well as a lot of insights from this collaboration of many different institutions,” he said.

About the Talking ASEAN: The Business Series

Dubbed as ‘The Talking ASEAN Business Series’, this dialogue forum is a new and extended version of The Habibie Center’s ‘Talking ASEAN Series’. In partnership with the BINUS UNIVERSITY INTERNATIONAL, the Coordinating Ministry of Economic Affairs of the Republic of Indonesia, and the Indonesian Services Dialogue Council, this new Talking ASEAN series will focus on issues pertaining to ASEAN’s economic cooperation.

Aside from strengthening awareness, knowledge, and understanding about ASEAN and its activities, especially with regard to opportunities and challenges around the Association’s socio-economic cooperation, to stakeholders, this initiative is also aimed at instilling ASEAN entrepreneurial spirit amongst the youths, especially those in Indonesia. The BINUS UNIVERSITY INTERNATIONAL and the Coordinating Ministry for Economic Affairs will take turn in hosting the organization of this initiative. 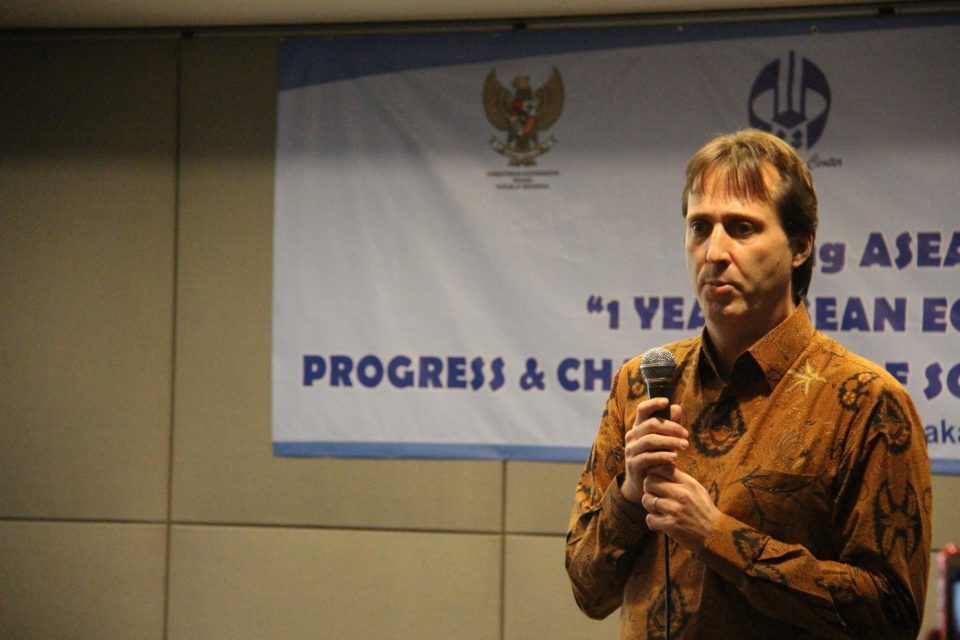 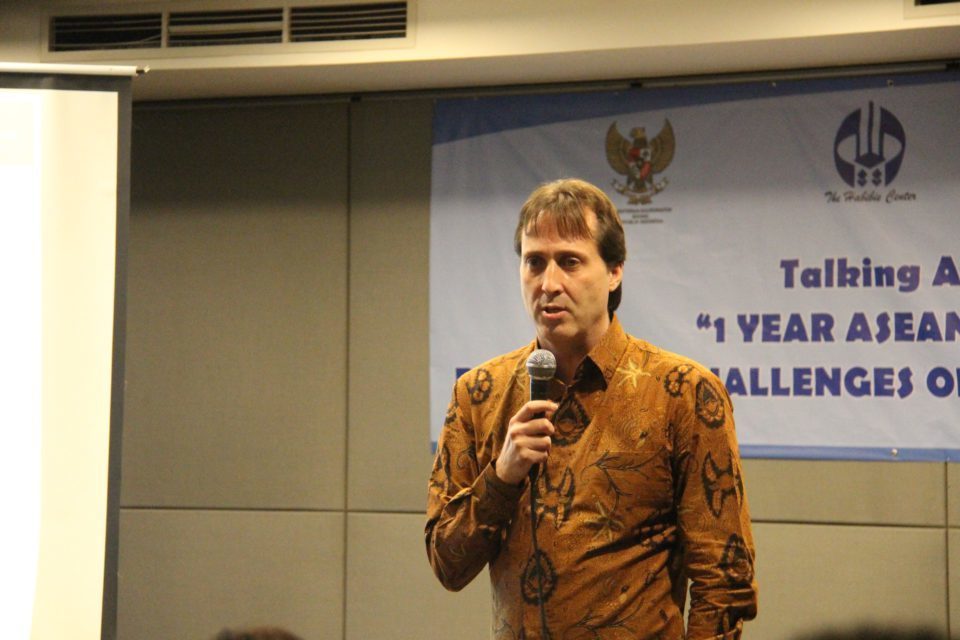 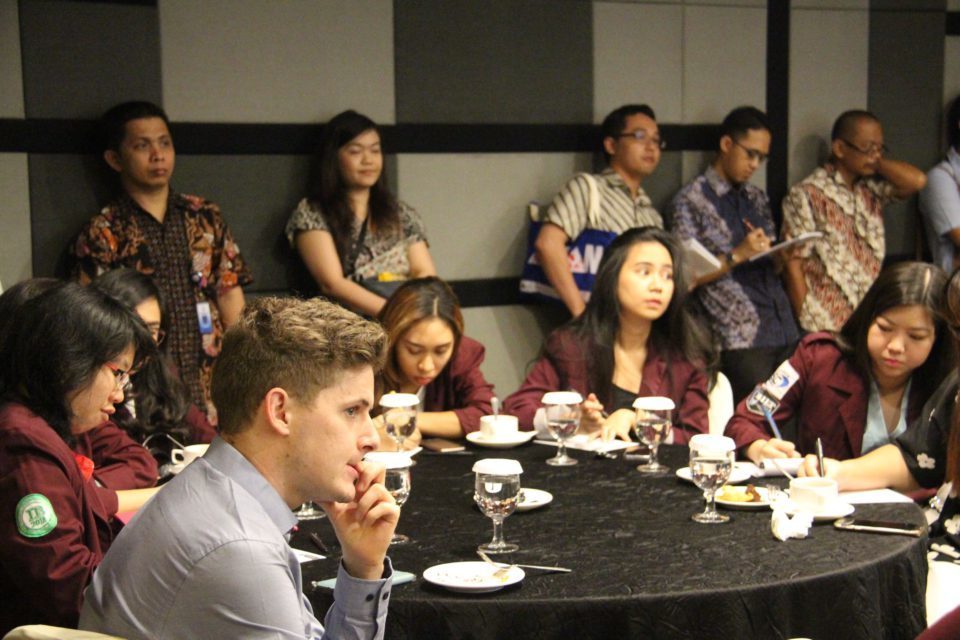 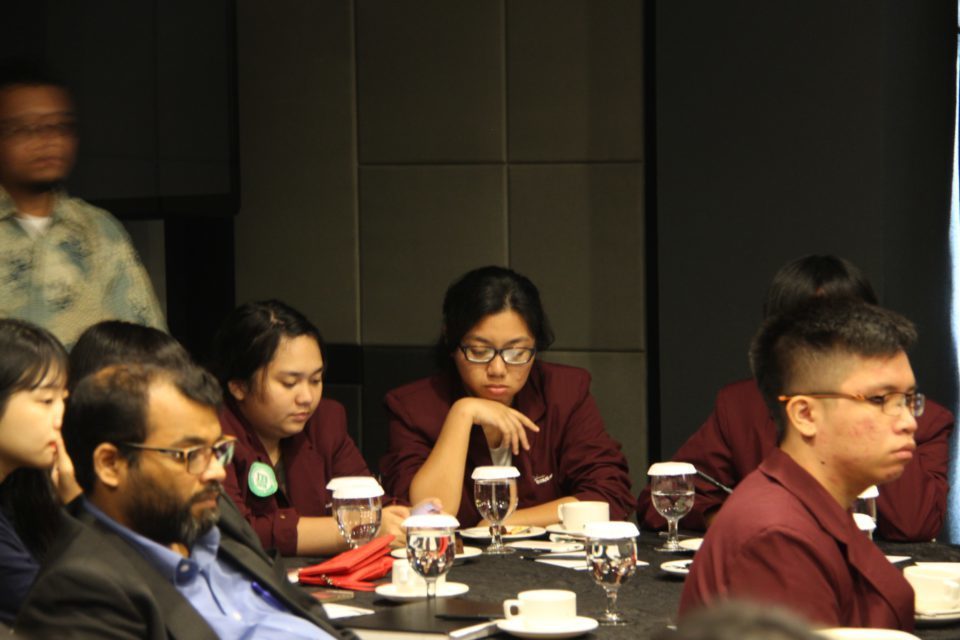 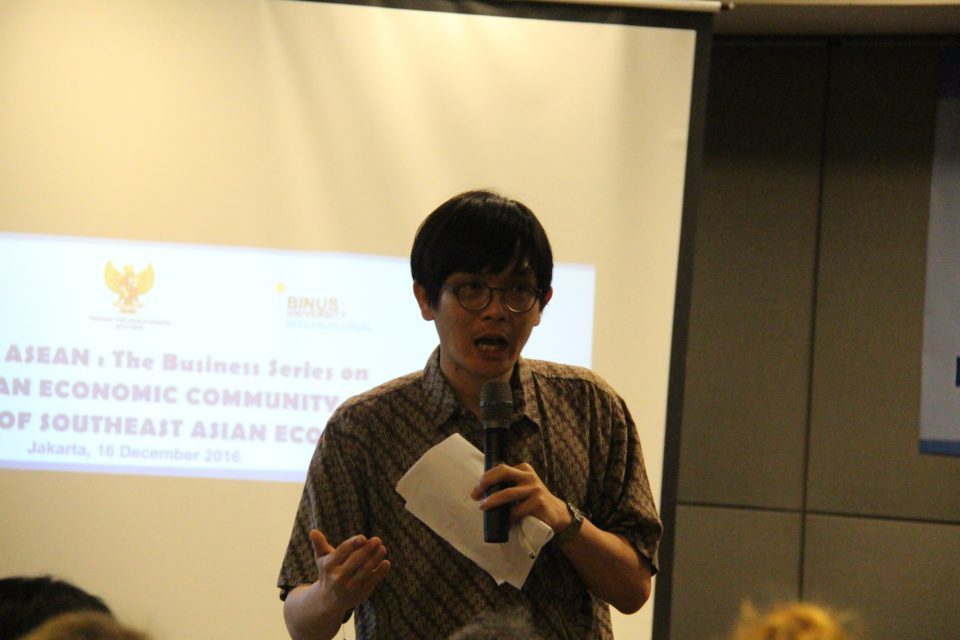 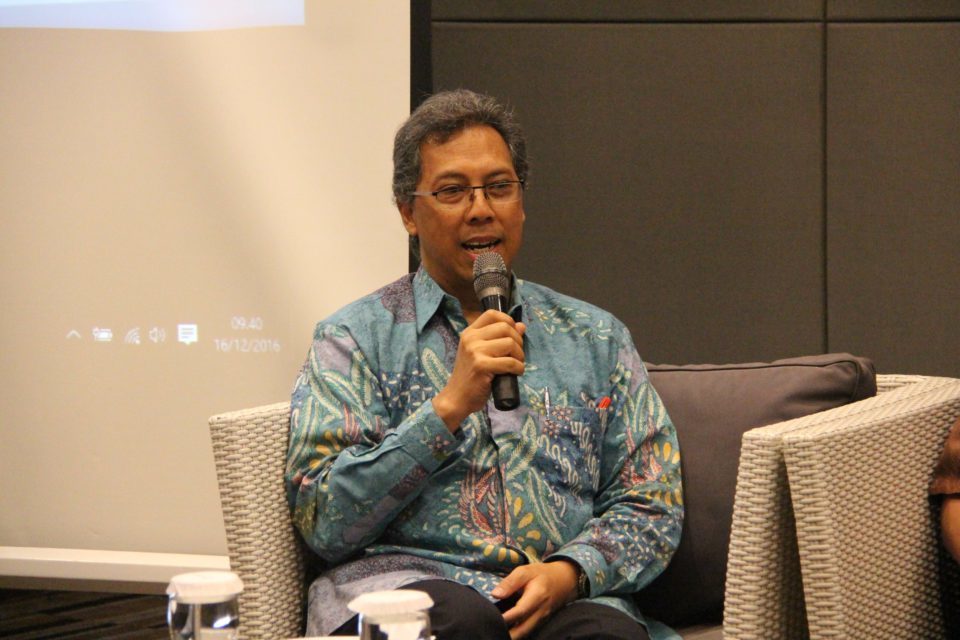 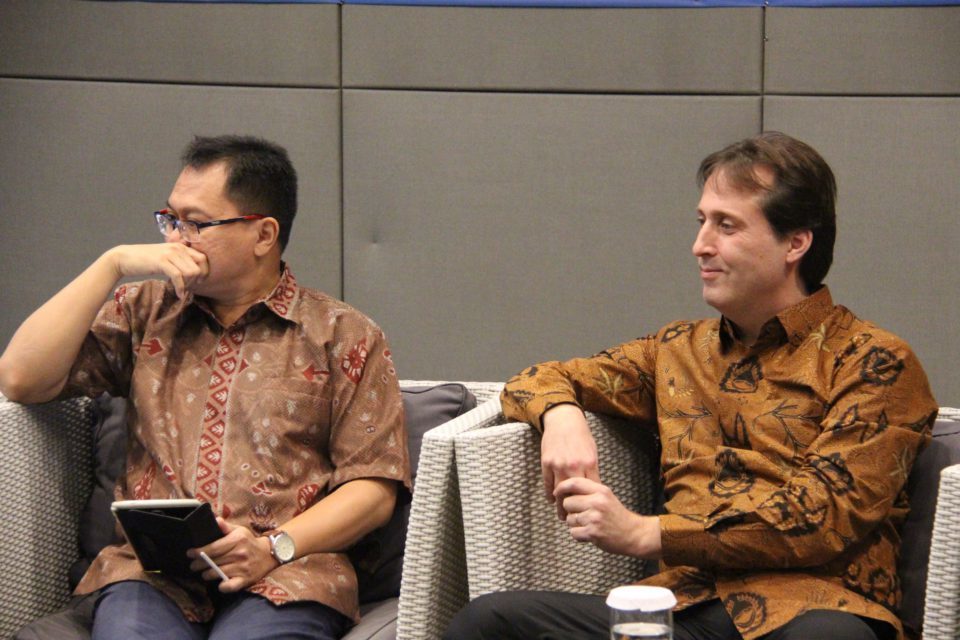 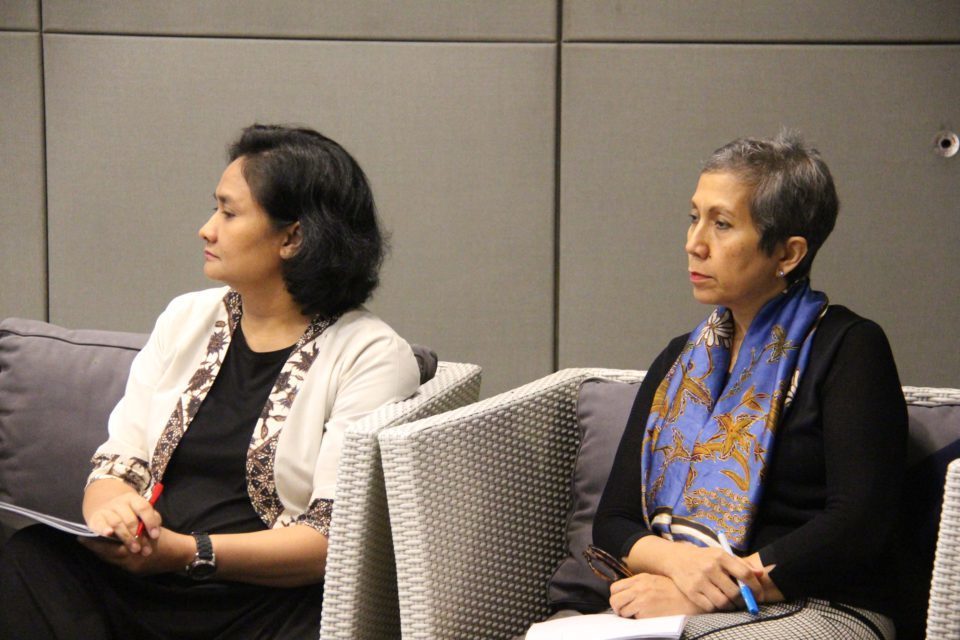