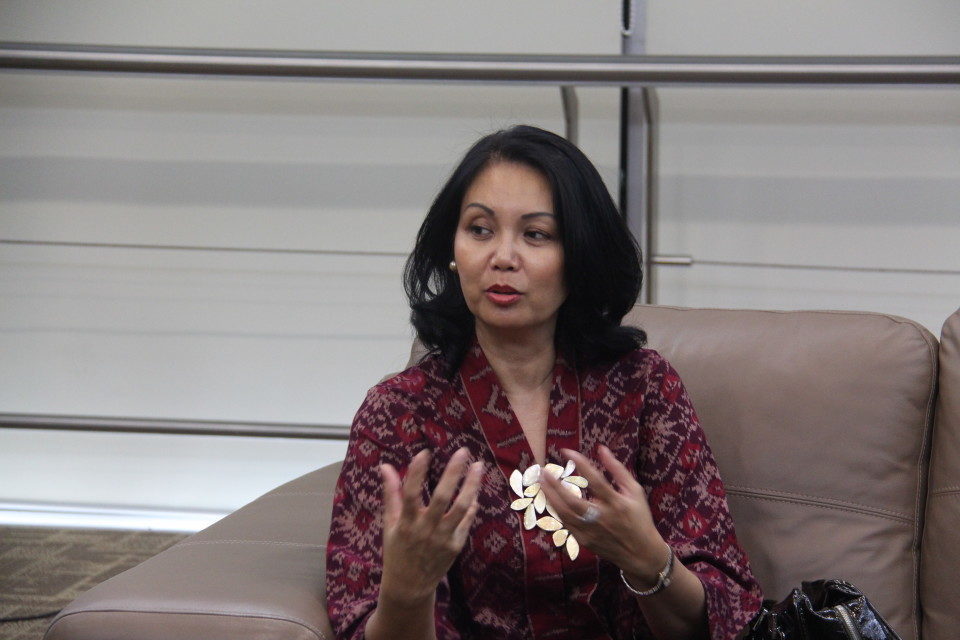 Like working, being a leader is regarded a manifestation of faith for Wiwiek D. Santoso. Consequently, there lies a huge mandate. Therefore, hit-and-miss is not tolerated in her present duty, as a Director of PT Marga Mandalasakti (MMS), one of the toll road operators in Indonesia.

It had possibly never occurred to Wiwiek D. Santoso to become the leader in a company that engage in toll road operations, a world where men undoubtedly dominates. Besides, with her educational background in finance, she did not really understand road construction materials, transportation management, and other intricacies that are closely related to toll roads.

Not to mention, Wiwiek had to confront other challenges which are not less complex. Wiwiek “inherited” roads in a very worrying condition at that time. Construction was poor, the roads were bumpy, gaping holes in the middle of the roads were common occurence, these only added to the heavy tasks for her to complete.

Road users’ curses have been part of her routine since 2008. At that time, Astra International set up PT MMS, a company engaging in toll road infrastructures. Wiwiek was trusted the position of the first chief executive officer until today.

The two enormous challenges were certainly complicated enough to ache Wiwiek’s head. Knowing her tasks were no piece of cake, Wiwiek then looked for ways to resolve the issues. Wiwiek realized, to manage an organization that has a myriad of complex problems, she needed a strategy formulation for a solution.

Based on the holding company’s leadership formula about which she had learnt, for the parent company in which she was used to work, Wiwiek led his colleagues in PT Marga Mandalasakti move towards a set of the company’s ideals that have been agreed, which is linking the public’s lives through toll roads.

Wiwiek’s career path to the present position of chief executive officer is fairly phenomenal. She began her career as Finance Manager in one of PT Astra International Tbk.’s subsidiaries that engaged in the automotive industry. It is fair to say, that was the beginning of Wiwiek’s encounter with a field that is undoubtedly dominated by men.

In carrying out her duties, Wiwiek was considered successful in realizing the company’s targets. Her good reputation then came to the ears of Astra International’s ranks of leaders. Finally, her leaders trusted her with great responsibility.

Her career’s success was not without causes. As an arek Malang, or native of Malang city, known for the courage and bravery to achieve their desire, Wiwiek’s leadership attitue had been carved from long ago. With that as a fairly strong foundation, coupled with the wealth of experience she had from her previous companies, came her analysis skill and sharpness in running an organization.

Aware of the complexities of her role, Wiwiek then figure out ways to resolve a number of leadership issues which she had already expected. With the help of her sharpness, Wiwiek implements a formula of strategy from the parent company, namely vision, values, and courage. She believes that the three factors can help her lead the organization, even when she has to make strategic decisions for the company.

“Becoming a toll road company with the best reputation in Indonesia, developing in a sustainable manner, having strong financial structure and solid organization in 2020,” is the vision that Wiwiek and her team seeks to achieve at the moment. This will be a big yet challenging achievement, given the number of issues waiting to be resolved right away.

In the process of achieving her vision, strategies have been carried out by Wiwiek as she leads the company. Most of them were are products of the parent company, but there were a few adjustments according to her company’s situation.

Additionally, Wiwiek also implemented a system that invites the parent company’s involvement. The system entails all of the company’s employees practising methodologies to manage the company hand in hand. Their ultimate goal is to maintain and develop business processes so thath the company can meet consumers needs as well as win at the industry’s competition.

The following thing that Wiwiek implement in her way of leadership is value. In this case, she seeks to grow positive values in every step her team takes. These positive values can be deemed “Business Ethics” in running a company. In her day-to-day leading of the company, Wiwiek put effort into raise the values of professionalism, ethics, openness, and innovation.

Having implemented those things, Wiwiek expects that her employees are able to implement the same values. “In this company, my role is simply a ‘coach’ of the colleagues. The goal is to enable them do better than myself. I want a good and more successful team than what I’ve got now. If this comes true, it will be my extraordinary happiness,” said Wiwiek.

To convey the values, Wiwiek mentioned communication as the most significant key. Through a comprehensible communication, Wiwiek hopes to deliver these positive values to her subordinates. No wonder, she often hold gatherings or forums as well as shows hospitality towards the employees in her day-to-day leadership in the office.

First, having a vision then being able to convey positive work values, last but not the least thing Wiwiek applies in leadership is courage. From the very beginning, courage serves as the foundation for Wiwiek’s steps along her elevating career path. Therefore, she stated, without courage, a leader will lessen her or his existence.

“It’s useless to have well-thought vision and strategies, but lacking the courage to carry out the assigned responsibilities,” said Wiwiek.

Having practised those values, Wiwiek successfully completed the construction of Tangerang-Merak toll road in flying colours. Her name keeps echoing along the success of the road’s connecting one area to the other. As Wiwiek said before, to her, work is the manifestation of faith. Providing satisfactory service and facilitating passing vehicles’ needs, Wiwiek did not only connect regions, but also connected the public’s lives.