DIRECTOR OF KAI SHARES HIS EXPERIENCE WITH STUDENTS 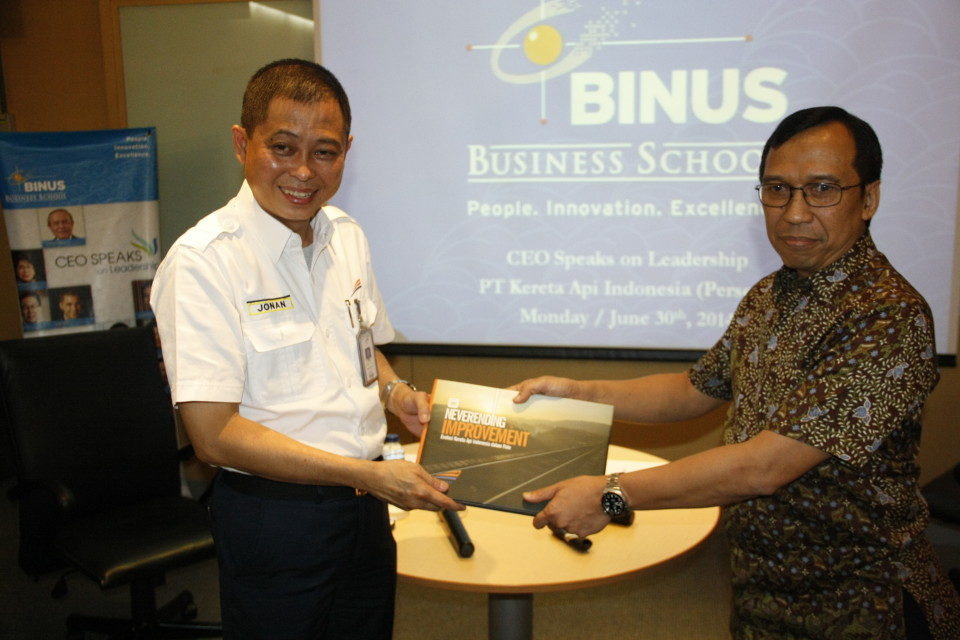 Ignasius Jonan, CEO of PT Kereta Api Indonesia, the state-owned train operator, was the guest at ‘CEO Speaks on Leadership’, a seminar at the BINUS Senayan campus on June 30. He delivered insights into the behaviors of leaders. “A leader must put their ego behind them. A leader must also be productive for the organization, firm, and stakeholders. One thing for sure is that a leader must become a role model for their colleagues.”

The seminar was hosted by Firdaus A. Alamsjah, Ph.D, the Executive Dean of BINUS BUSINESS SCHOOL. The topic for the seminar was “A Leader’s Role in Transformation,” using PT KAI as its case study.

Under Jonan’s leadership KAI has significantly improved since he took the role 5 years ago.  KAI has been able to multiply their profit while earning the status of a ‘healthy’ state-owned enterprise with an ‘A’ grade,as well as receiving several awards. Numerous changes and innovationswhich led to the success of KAI under his leadership were used as real examples in learning about innovation,leadership, business transformation and business growth.

Jonan spoke of his temperament, which has led some to label him galak, or fierce. “I am used to being called direct, fierce, ferocious and many other terms. I never think for too long when I fire someone. If they don’t perform well, fire them. I’ve already raised their welfare, anyway. I used the pay-for-performance principle,” said Jonan.

Despite his forthright personality, Jonan is respected by his staff as his demeanor has had a  positive impact on his company and staff.“Mr. Jonan always looks after our welfare. Our salary has been raised up to 3 times the original amount, as we are encouraged to give our best to the company,” said Dwiyana, one of the staff that were present at the seminar.

Jonan repeatedly emphasized his result-oriented approach. “I don’t care about the process as long as it does not violate the company’s laws and ethics. The important thing is that the results are as expected from the point of view of the company,” added Jonan.

In the past decade, KAI has managed to become one of the public transportation companiesthat has revolutionized its approach and shown its maturity in providing services to society. Not only have train stations become more comfortable, they also have more sufficient seating, environmentally-friendly toilets,e-tickets, efficient call centers, while also removing third-party ticket sellers.

The company also launched 2 new services: the Medan Airportlink at Kuala Namu and the Pangrango line that connects Bogor and Sukabumi railways. These impressive developmentshelped KAI garner more than 100 awards between 2009 and 2013.

The host, Firdaus, summed up his reasons for providing the event. “CEO Speaks is one way to learn efficiently – outside of using the textbook – that is applied by BINUS BUSINESS SCHOOL to make their graduates into future innovative leaders in their companies. We hope that the participants can get useful knowledge that they can applyin their career”. (RAW)