THE ESSENTIALS OF ‘ABUNDANCE MENTALITY’ FOR COMPANY LEADERS 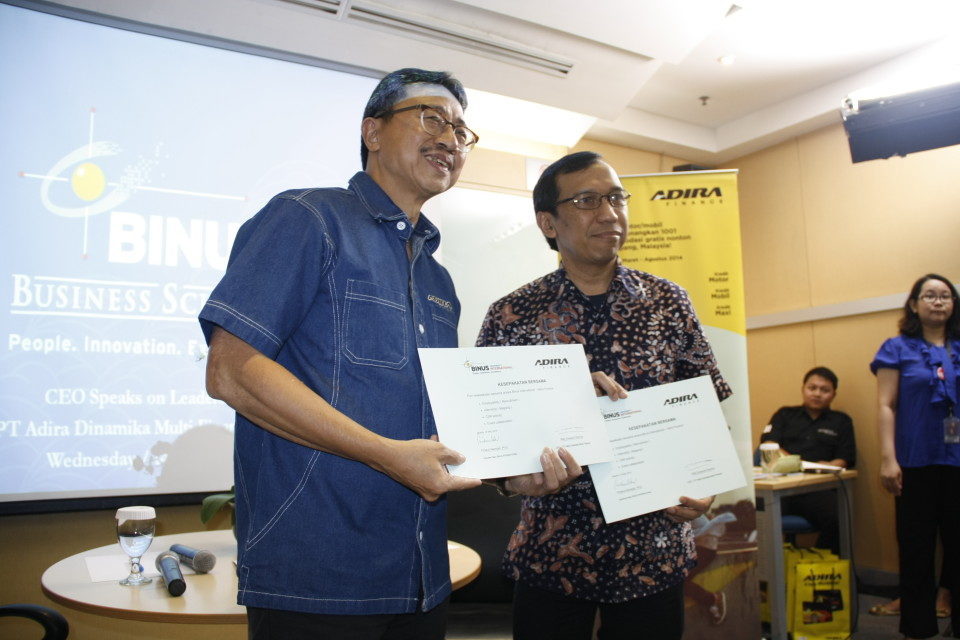 With 11,000 dealers and 33,000 employees, PT Adira Dinamika Multifinance Tbk (Adira Finance) is the largest multi-finance company in Indonesia. It has been challenging for Adira to maintain its success since its establishment in 1990 with such a large amount of employees.

The human resources department plays an important role at Adira. Challenges in the financial industry keep coming and Adira is not backing away from them.

The role of leader is to guide the company past all obstacles, and since 2012 this has been the job of the President Director of Adira Finance, Willy Suwandi Dharma. Under his direction, Adira increased their net income by 20% from Rp 1.4 trillion in 2012 to Rp 1.7 trillion in 2013, with a 14% increase of operating revenues to Rp 6 trillion.

It was not easy for Willy to do all this. Without support from the other employees, it is unlikely that Adira, a subsidiary of Danamon Bank and Temasek Holdings, could have maintained its leading position in the finance industry. Willy tries to apply the theories that he has learned from the daily challenges.

This was revealed during the CEO Speaks on Leadership forum that was held by BINUS Business School on 14 May at the Joseph Wibowo Center. At this event, Willy shared his experience and knowledge about the finance industry in which he has been immersed for 10 years.

“The biggest challenge that is faced by Adira Finance, especially in management, is staff turnover. The annual turnover is 12% to 15 %, and with 33,000 employees that means there are 5,000 employees who resign every year. Although this looks like quite a vast number, in our industry, this is actually the lowest percentage,” said Willy.

Willy said that there are three keys to success when leading Adira: being a good listener; a fast decision-maker and; applying ‘abundance mentality’. Abundance mentality is the mindset whereby we think of ourselves as having a wealth of choices, instead of the more common mindset of scarcity or negativity. He added that a good leader is one who always wants to develop without being afraid of being replaced by the next generation.

Strengthening the company culture was considered essential in maintaining their human resources. Willy said that there are employees that are still working for Adira not only because of the financial benefits, but also the atmosphere and relationships among the staff. One of the routines that Adira Finance does every day is having morning prayers before work.

The CEO Speaks forum is a routine event held by BBS to give practical knowledge to the students, to supplement their traditional book-learning.

In this session, there were also collaborations between Adira Finance and BINUS International in the form of joint ventures that cover employability (professional recruitment), internship, corporate social responsibilty and event collaboration. (RAW)